Skip to content
Next
Rimba Raya Delivers Seeds of Change 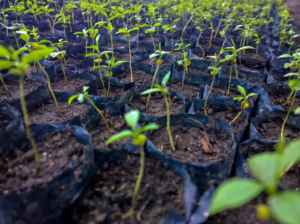 Just months after completing issuing its first credits, the Rimba Raya project is in full swing and benefits are flowing to communities, the environment and to orangutans. Already the project has delivered clean water filters and fuel-efficient, smokeless cook stoves to the communities adjacent to the project area. Its latest initiative was planting some 40,000 trees in an area illegally deforested by the palm oil company with whom the company has clashed for 5 long years.

Sometime in early 2013, shortly before Rimba Raya finally won its decisive battle to secure the clean title to the project area, the palm oil company “accidently” crossed over its boundaries and within a week had
cleared and cut drainage canals in an 80 hectare area–despite the protests of nearby community members and Rimba Raya staff. Forestry officials subsequently confirmed that the incursion was illegal and security forces were sent to support Rimba Raya’s reforestation effort.

With a grant from the InfiniteEARTH Foundation, 40,000 seedlings were purchased, a greenhouse was built and the communities were paid to replant the area. Two indigenous species of rubber and gum trees were planted in a 50% density configuration known as the “jungle rubber” model. In this model, indigenous cash crop species are planted in larger spacing than a normal plantation, allowing the natural regeneration of mixed native species to compete with the cash crops.

Studies have shown that this benefits the productivity of the cash crops and allows for a more natural diversified reforestation of degraded areas. These same communities will be the custodians of these “seminatural” plantations and will be allowed to benefit 100% from its future harvest.

InfiniteEARTH is in early conversations with Bridgestone Tire, who are scheduled to visit the project site
in March of this year, as a means to make direct market connections for the future rubber harvest. The same
will be done for (chewing) gum with companies like Wringley’s to be targeted.

“Rimba Raya was never designed to be a welfare program. We believe that a program of cash payments from carbon sales is the worst thing we can do for these communities. Aside from providing health and education benefits, the most important thing we can do it so finance income diversification opportunities like this as a means of changing the unsustainable relationship these communities have had with the forest historically” said Todd Lemons, CEO of InfiniteEARTH, the project developer. Mr. Lemons went on further to say that, “It would be irresponsible for us to make these communities dependent on cash revenues from carbon sales, given the uncertainty of the carbon markets. Our goal is to use carbon revenues to finance a paradigm shift whereby the communities begin to thrive, independently, from a sustainable forest-conservation model, rather than an unsustainable extractive model. The changes we make at Rimba Raya today have to be sustainable for generations into the future, even in our absence or the absence of carbon markets.”

Back To Field Notes