Nearly 80 percent of the 600 households in Telaga Pulang, in Central Kalimantan, now recycle their household waste, using the bank to literally deposit the materials and in return receive a small sum per kilogram. Villagers can either take the money on the spot, or bank it and receive interest if the money stays in the account for more than a month.

“People used to throw rubbish into the river, but not anymore,” said Eneng Heriyanto, 40, the Recycle Bank manager. The village is one of 9 supported by Rimba Raya Conservation and the programme team suggested the Recycle Bank idea as a way to reduce pollution and improve household incomes.

In less than a year, the programme has grown rapidly and now four other villages also send their waste to the sorting centre. More than a dozen different items can be recycled, each with a different price per kg, and include paper, plastics, iron and aluminium, which fetches the highest price.

Once the materials are sorted, they are trucked to the city of Sampit about four hours away to be sold to dealers.

So far, most villagers prefer to leave their money in the bank, Pak Eneng said. There’s also a plan to reward villagers with basic essentials, such as rice and cooking oil, instead of cash.

Rimba Raya hopes to expand the Recycle Bank to other villages along the river and also promote another related programme that turns materials that cannot be recycled into handicrafts. A group of women in Telaga Pulang are skillfully turning household waste, such as old fabric, into key chains, fans and brooches for sale.

This is part of Rimba Raya’s broader goal of improving villagers’ economic independence by promoting new skills and job opportunities, working in consultation with them and providing technical advice. A little extra income and new skills often go a long way in strengthening communities, particularly if the programmes bring villagers together to cooperate for a common good. 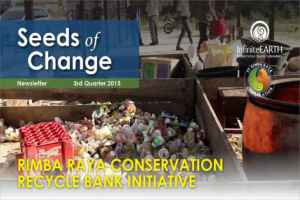 A local Co-Op in Telaga Pulag (A village involved in the Recycle Bank Initiative) sells products under the name “Ratik Bahalap”, which translates to “Pretty Rubbish”, which they manufacture from Recycle Bank materials.